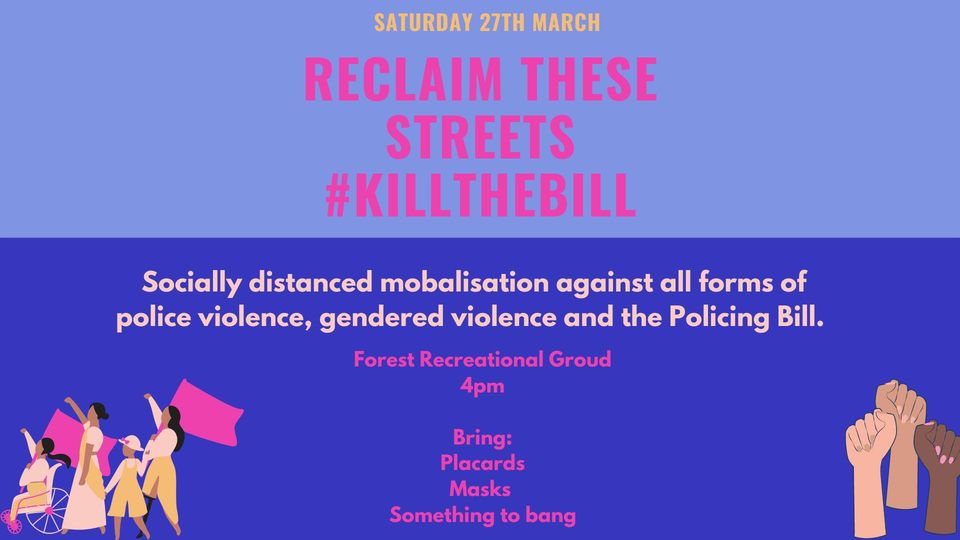 The event is currently believed to be supported by a variety of groups including (but not exclusively) BLM, Unite, Stand up to Racism , Nottingham Women’s Centre, Acorn, Sisters Uncut Nottingham, Next Generation, Another Europe is Possible, Decolonise-Decarbonise, Broxtowe Labour, Trade Union Council, KONP (Keep our NHS Public), Open Nottingham, Unite Community.

Police liaison is currently in progress to ensure effective communication and safety.

We are inviting all womxn and allies to gather on Forest Rec to a socially distanced protest against all forms of police violence, gendered violence and the Policing Bill.

Sarah Everard’s violent murder could have been prevented. Not only did a police officer murder Sarah, the Police enabled the violence to take place by refusing to take reports of indecent exposure seriously and then other police officers shared graphic images while at the crime scene.

We have seen this before and we will see it again. We stand in solidarity and rage with Blessing Olusegun, Bibaa Henry, Nicole Smallman, and so many others who have been victims of police violence.

We stand in solidarity with those women in Nottingham who were tricked into intimate relationships by the undercover police Mark Kennedy, and those who are constantly let down by our inadequate and antiquated criminal justice system that protects abusers and violent men.

We are deeply concerned that the Police, Crime, Sentencing and Courts Bill seeks to further curtail the right to protest, to gather, and to have a voice – this is a threat to UK democracy. We share the concerns that this bill ignores recommendations from Gypsy, Traveller and Roma community groups and rights organisations, and that the proposed measures would be harmful and discriminatory to these communities.