A group of 9 Spanish activists from Zaragoza in Northern Spain are walking from Portsmouth and arriving 30th October in Glasgow for COP26.
As they passed through Nottingham on Tue 12th Oct, we entertained them with a quick game of ‘human skittles’ each highlighting a human activity causing the climate crisis.

Words from one of the group, Maribel Roldón,  “Science tells us that the future of humanity depends on what happens at the Climate Change Summit (COP26) in Glasgow in November 2021. It’s our very last chance to take effective action.” 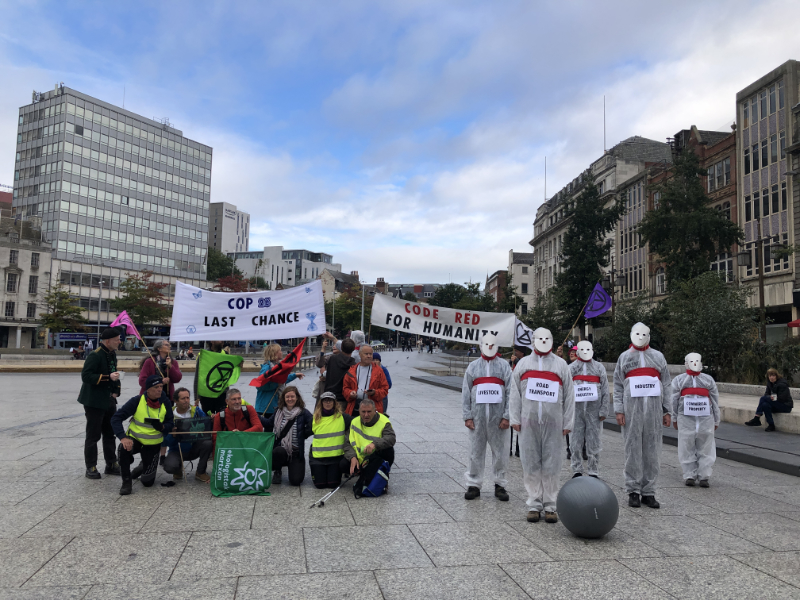 the human causes of climate change

The skittles have signs representing some of these causes listed below..

2. Household energy 10.9%
Heating, Cooking and electricity generate CO2 from the energy industry and directly at home from the burning of oil, gas and coal fossil fuels and firewood.

3. Industry 10.6%
The chemical process used in Cement manufacture releases CO2.  Large amounts of energy are also needed in cement manufacture and industry which release CO2 from the energy industry

5. Iron and Steel 7.2%
The iron and steel energy both uses huge amounts of energy for the temperatures required and uses coke (a fossil fuel) as part of the manufacturing process, releasing large amounts of CO2.

6. Commercial energy use 6.6%
Lighting, computers, running appliances and machines in offices, shops restaurants and other commercial buildings from the burning of oil, gas and coal fossil fuels.

7. LiveStock 5.8%
Microbes in the digestive tracts of mainly ruminants such as cattle and sheep release methane, a much more powerful greenhouse gas than carbon dioxide.

8. Chemical and Petrochemical 5.8%
Chemical processes release CO2 as a biproduct which is often used in other industries but it ultimately is released into the atmosphere. Large amounts of energy are used to drive chemical processes which releases CO2 in the energy industry.

9. Flaring and methane leaks from fossil fuel industry 5.8%
Mining coal and drilling for oil results in accidental release of methane. Natural gas is methane and burning it for energy production is supposedly “cleaner” in that it produces more energy for the amount of CO2 dioxide released.  However, being a much more powerful greenhouse gas than CO2 the amount that is lost in leaks doesn’t make it any “cleaner” than coal.

In order to deal with excess methane, oil and gas companies burn it without using the energy.  This is known as flaring and directly releases  CO2 into the atmosphere.

10. Deforestation and crop burning 5.7%
Deforestation reduces the amount of carbon able to be stored in forests and forest soils. This also reduces biodiversity and habitats pushing more species towards extinction.

12. Shipping and aviation 3.6%
81% of aviation emission come from passenger and 19% from goods.  Burning Kerosene, a fossil fuel, release carbon dioxide

Shipping of goods and passengers, releases CO2 from burning diesel and petrol.

13. Organic Landfill 1.9%
>Biodegradable and compostable material buried in landfill do not breakdown properly due to a lack of oxygen.  Instead, it releases methane, a much more powerful green house gas than CO2, over decades.

Source : Our World in Data (2020)
https://ourworldindata.org/ghg-emissions-by-sector