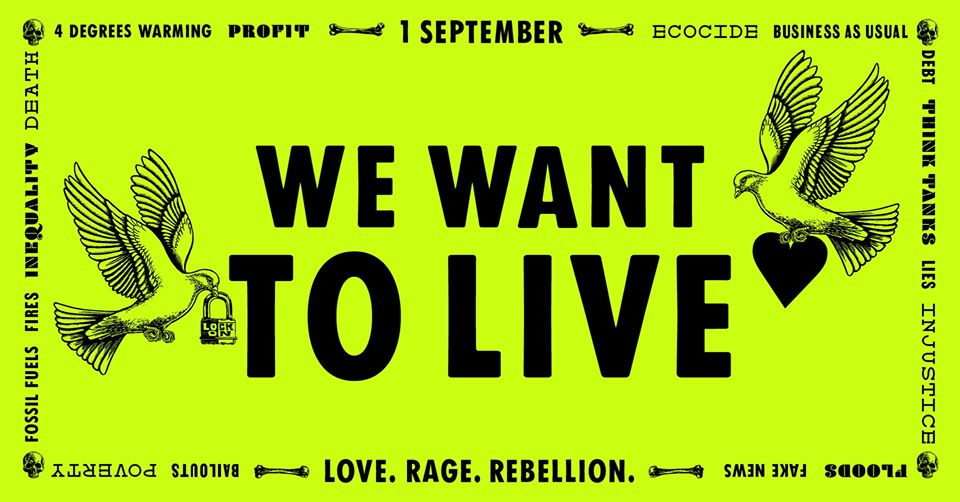 We are at an intersection of global crises. Climate, COVID-19, racial injustice – all are symptoms of a toxic system that is driving us to extinction.

We cannot carry on like this. The system is killing us.

WE WANT TO LIVE.

The Government is failing to do what’s needed to keep us safe. They ignored the warnings about coronavirus and now they’re ignoring warnings of a 4˚C world from their official Committee on Climate Change, a warning that could result in billions of deaths – with racially marginalised communities, and those in the Global South on the front line.

Enough’s enough. We have an opportunity NOW as we emerge from the pandemic to make necessary change, but business-as-usual is fighting to regain its hold. We can’t let that happen!

Beginning on 1st September, Extinction Rebellion will return. On that day the UK parliament starts re-sitting after the summer: but we’re not going to let them back in until they agree to start anew with justice, care and life at the heart of it. From the 1st we will peacefully blockade the UK Parliament in London until they promise that the first thing they’ll do is to pass our three demands into law. The Rebellion will not just be focused on London though. Welsh Rebels will join us in rebellion by causing disruption in Cardiff, with rebels in the North and Scotland formulating plans as we speak. More on this coming soon.

Connect and Get Involved

Join the Rebellion Broadcast to get live updates on the rebellion: https://t.me/rebellionbroadcast

In order to build pressure towards the blockade, there will be a Countdown to Rebellion starting 28th August with local groups around the country invited to cause high impact disruption in their own regions, to gather and galvanize rebels in readiness for action and to put the government on warning that the Rebellion is coming.

Find out the plan and how to get involved here:
https://rebellion.earth/uk-rebellion-2020/

We invite everyone who is sick of the lies, injustice, inequality and harm, to join us.

Together we are powerful. Crisis does not have to mean collapse.