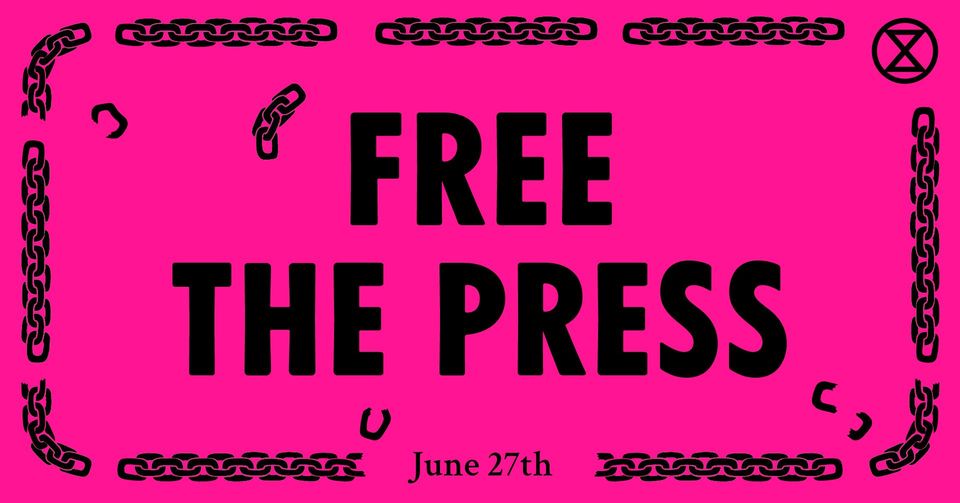 A weekend uprising in London, where we will join together with other movements and demand the change we need.
In 2020 we stopped the presses for one day, raising the alarm on a broken media held hostage by 4 billionaire crooks… ten days later, Rupert Murdoch had a private meeting with Priti Patel.
Now, we have Patel’s Policing Bill pushing to further criminalise protest, demonise travellers and embolden a violently prejudiced police force… and we have a mainstream media that is little more than the establishment’s mouthpiece, twisting the narrative, and greenwashing the climate emergency
Our democracy is under immediate threat.
Petitions aren’t gonna win, but they are a good way to show how many of us there are, and get Murdoch quaking in his boots before we turn up at his doorstep >> Sign Here
Saturday 26th (facebook event)
We’ll be part of a cross-movement national demonstration, joining the dots between our struggles and setting the scene for us to target the press the next day. This event is organised by People’s Assembly.
#DemandANewNormal #KillTheBill
Assemble 12 Noon – Portland Place.
March to Parliament Square.

Sunday 27th June (facebook event)
We demand a press that is fit for purpose, a democracy that serves the people, and a country that is united against hate & prepared to face the challenges ahead.

Expect to be challenged, informed and inspired.

Expect radical truth, powerful love and the solidarity of a shared fight.