Enough Is Enough : Together We March 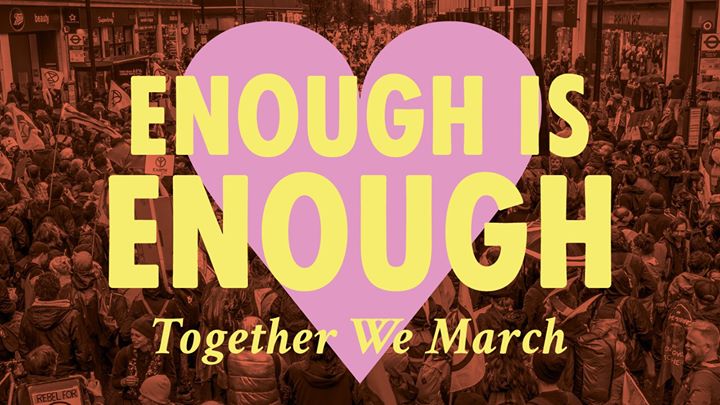 This isn’t about Extinction Rebellion.
This is about the right to peaceful protest, and saying enough to harm.
Bring your organisation/movement/group’s own banners, placards, voices and love.

Enough of police clamping down on peaceful protesters.
Enough of being labelled extremists for standing up for each other.
Enough fires decimating wildlife and homes from the UK to the USA, Australia to Amazon & Africa.
Enough racism. Enough separation.
Enough devastating droughts, floods and storms.
Enough of the media controlling our story.
Enough government failure.

We will march together wearing our hearts on our sleeves, showing the collective strength of our hearts.

Craft for climate, wearing pink and red
**create your own heart and wear it on your sleeve**
as we march together in resistance and solidarity.

So if you believe in the right to peacefully protest, please join us on 22nd February.

Enough is enough. Together we march.

LATER : Extinction Underground at the Vaults “…an interactive and immersive late night playground beneath the streets of London in response to the climate and ecological emergency. An array of artists, performers, & radicals come together with vital acts of co-creation, artistic expression, connection to the planet and one another.”
https://www.facebook.com/events/514616975803073/