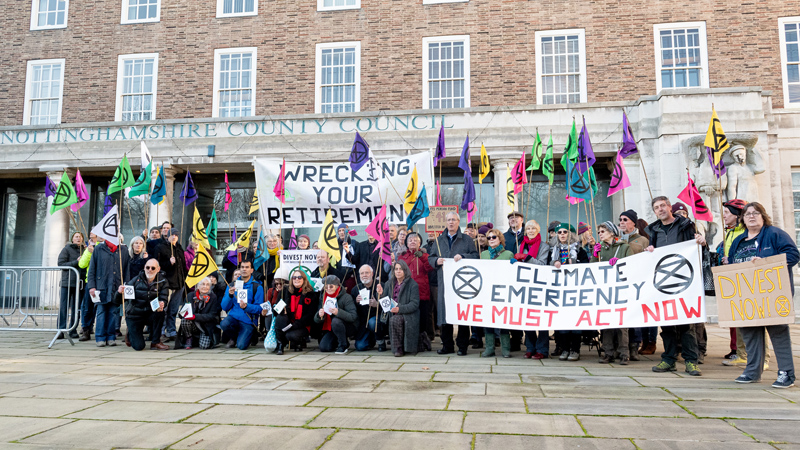 XR Nottingham interrupted the Nottinghamshire Pension Fund meeting a County Hall on 20th Jan 2020. A declaration was read out loud to urge the nine voting county councillors to DIVEST the fund from fossil fuels.

Nottinghamshire County Council has invested at least £250 million from it’s pension fund in fossil fuel companies.
On average, each person with a pension held in this fund has £5,300 of their money contributing to global warming.
Mark Carney of the Bank of England has warned that oil and gas investments are likely to collapse.
If the pension fund crashes then schools, advice centres, carers support and many more local services would have their budgets slashed to make up some of the missing money for the 37,000 existing pensioners.
Extinction Rebellion want the County Councillors who sit on the Pensions Committee to sell these risky shares, then invest the money in companies which don’t add to global warming.
Each of the nine County Councillors responsible for the fund were invited to meet a member of Extinction Rebellion outside County Hall to accept the gift of an oak sapling, and to talk about Divestment.
“A society grows great when old men plant trees whose shade they know they shall never sit in.” – Greek proverb
None of the Councillors collected their trees. This invitation remains open and members of Extinction Rebellion Nottingham will be directly contacting each councillor to repeat the offer of a sapling.

Help us add more voices and pressure on the committee by taking the email action – you don’t have to be a pension fund member as this affects all of us in Nottinghamshire.

Find out more about our Divestment Working Group

Nottingham Extinction Rebellion will speak for four minutes and then leave in an orderly fashion to allow you to continue the rest of the meeting uninterrupted.

We are here today to declare that this Committee’s continued failure to divest the Pension Fund out of fossil fuels is economically, morally and environmentally indefensible.

The scientific evidence is overwhelming. We have already entered a period of rapid global heating driven primarily by burning fossil fuels.

The Paris Agreement of 2015 recognised that unless we take immediate and radical steps to reduce emissions we face a terrifying future of climate chaos, ecological breakdown and mass extinctions.

This is an emergency and we ALL must act now.

Companies like Shell and BP can only continue their ecocidal activities with the support of the financial system. At present this Pension Fund has at over 250 million pounds invested directly in oil, gas and coal companies.

Over the past year we have repeatedly brought this to your attention via hundreds of emails and letters, a signed petition; tabled questions at the AGM; and other peaceful demonstrations- but these have all been ignored.

Today we have brought each of the 9 voting councillors a gift of an English Oak tree, symbolising our shared hopes of a sustainable future for the planet.

Councillors, your sapling can be still be collected in the foyer after this meeting ends.

You nine councillors, who have chosen to leave the chamber, have the power to change things here and now.  We demand that you act urgently, wisely and responsibly on behalf of your pension fund members, and indeed us all, by taking immediate steps to divest.

The Governor of the Bank of England recently warned that fossil fuel investments are likely to see a massive collapse in value over the next few years.  By failing to divest now you are therefore risking ruin for your 47,000 pension fund members and failing in your primary duty of safeguarding their financial security in retirement.

Over 160 UK institutions including 8 local government pension funds have already committed to divestment. Nottingham City Council backs divestment of the Pension Fund as consistent with their own commendable 2028 zero carbon target.

Your current policy of engagement with fossil fuel companies is clearly not working. Their statements remain nothing more than cynical spin and green-wash. We urge you instead to invest in businesses that can help us transition to a zero carbon economy, whose share value, in contrast to fossil fuel companies, are predicted to rise rapidly.

If you fail to take concrete steps to begin divestment now, you leave Extinction Rebellion no choice but to continue to escalate our actions.

Further delay threatens the financial security of your members and the future of us all.

THERE ARE NO PENSIONS ON A DEAD PLANET

1. Mark Carney The Today Programme
2. Pensions shortfall
3. The Intergovernmental Panel on Climate Change
4. The Garnaut Climate Change Review  quotes Lucas et al writing in 2007.
5. UN Principles for Responsible Investment on the Inevitable Policy Response of climate change risk
6. Pension Fund list of equity holdings
7. Nottinghamshire Pension Fund 2019 AGM record of Q&A session
8. The goal of the Paris Agreement is to prevent dangerous climate change, seeking it limit temperature rise to 1.5°C if possible. The Intergovernmental Panel on Climate Change’s 2018 Special Report showed that 1.5°C is the safe limit for warming. Warming beyond this would bring catastrophic and runaway climate change. To limit temperature rise, global emissions must reduce by 45% by 2030 (from 2010 levels) and must be net zero by 2050